The fight took place at the State Farm Arena in Atlanta, Georgia, and was broadcast live on Showtime network. It was the main event of the evening, with Jean Pascal defending his World Boxing Association (WBA) Light Heavyweight Championship against Badou Jack as the co-main event.

In the first round Tank landed some straight lefts while Gamboa was looking to counter off of the left with his right hand. Gamboa went down in the second round from a left hand to the chin and immediately looked down at his right ankle – which would be the focal point of the fight for the coming rounds as he seemed to have issues with his right leg and in particular his right foot/ankle.

The fifth round was a very exciting one, as Davis came forward while landing enormous punches while Gamboa was eating power shots and landing a couple of his own – just enough to slow down Davis and make it through the round.

In the seventh round Gamboa finally had a good round, with Davis having a low output and Gamboa pushing him backwards for the first time in the fight as Davis was breathing through his mouth and looking fairly gassed.

In the eighth round Gamboa continued with his momentum from the previous round until he was caught with a big left hand at the end of the round that put him on the canvas once again.

Gamboa rose off the canvas but was taking more punishment in the ninth round. Davis was very tired himself, but his youth was showing as he continued to find a way to throw more punches than the challenger.

Going down the stretch in the championship rounds Tank managed to dig deep into the well of youth and get his second wind to really up his work rate and put his shots together. He would put Gamboa down in the twelfth and final round for the last time, earning the TKO victory at 1:17 of the final round.

Anthony Joshua is the WBA Boxer of the Month 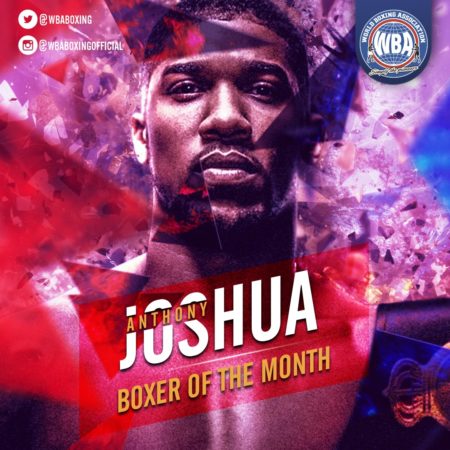