The super middleweight champion of the World Boxing Association, Rocky Fielding, and his challenger Saul “El Canelo” Alvarez met at the traditional arrival in New York where they were received by fans and the media.

The first to make his appearance on the red carpet was Rocky Fielding (27-1, 15 KO’s), who made a tour for the photographers and to attend the international media calls and questions.

Among many questions, the one that stands out is if he is a boxer that poses a problem for the Mexican challenger, to which the champion said: “When I won my title, nobody trusted that I would do it and I did it. People can talk, but in the ring everything is different.”

“I am the champion and therefore I come prepared for everything. He (Canelo) is a strong boxer but I am bigger and I have length,” added the Briton.

The second to make his triumphant arrival was the Mexican and Latin star Saul “El Canelo” Alvarez (50-1-2, 34 KO’s).

After the arrivals the Mexican challenger attended to the media for some Q&A.

“Fielding is the champion and we prepare for the worst. We are not going to talk about other battles without first resolving this one. It is important for my legacy to win this title, said the Aztec.

“We have many plans and one of them is to fight in Mexico against my people, but first we have to come out with the victory. We do not work thinking about the weight, we work as normal and we had an excellent camp,” said Alvarez.

Saul Alvarez and Rocky Fielding will face each other on Saturday for the WBA super middleweight title at the historic arena of Madison Square Garden, in a presentation by Golden Boy Promotions and Matchroom Boxing on DAZN broadcast.

Taylor and Wahlstrom to steal the show in New York 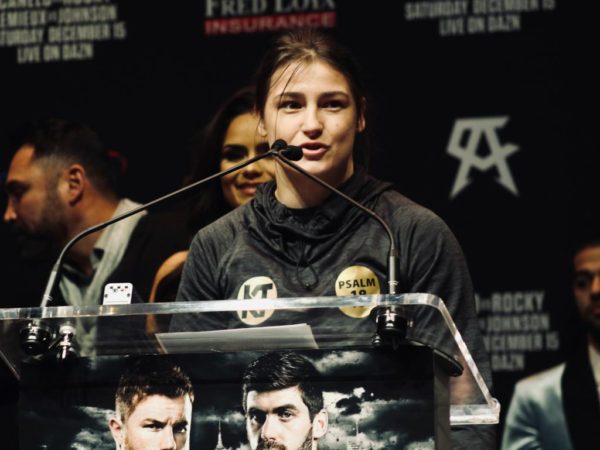