Andrew “El Chango” Cancio scored his 20th victory, 15th via knockout, as he scored a stunning upset victory over Alberto “El Explosivo” Machado who was entered the ring undefeated in 21 bouts.

The fight took place at Fantasy Springs Casino in Indio, California, and was promoted by Golden Boy Promotions and streamed on the DAZN network.

Machado was a heavy favorite coming into the fight, as he has been under the tutelage of legendary trainer Freddie Roach, as he was looking for the biggest names and fights in the division seeing as he has been a hot commodity – entering the fight with 17KO’s in 21 fights, with an impeccable record and some highlight reel KO’s.

The fight started off looking like another early night for the champion, as he scored a knockdown off a left hand in the very first round – with it looking like his power would simply be too much for another opponent to handle.

Cancio, to his credit and gameness, rose off the canvas and continued to press forward as he looked like round by round he was making the champion more and more uncomfortable and was taking his power very well.

In the fourth round the fight suddenly took a massive turn when a body shot sent the champion to a knee. Machado rose, only to be knocked down two more times with effective body shots and having the fight waved off after the third knockdown.

It was a stunning victory that not many people saw coming, with Cancio effectively scoring the victory that he has been looking for for 12 years; a world title victory.

For Machado, he will be back in the gym in no time with Roach to practice his craft and is likely considering a move up in weight since he mentioned he felt weak after the fight.

Gervonta Davis blasts Ruiz in one round 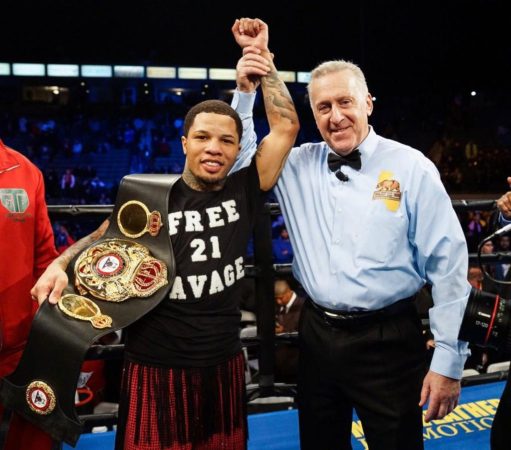