Brandon Figueroa and Julio Ceja participated in the final press conference for their fight this Saturday for the super bantamweight title of the World Boxing Association (WBA); currently held by Figueroa.

Both men will enter the ring this Saturday at the MGM Grand in Las Vegas in a fight that promises exchanges and drama due to the styles of both fighters. The fundamental thing for both men is the black and gold title that will be at stake, which they talked about in their statements.

“It’s an honor (to be a WBA champion). I know that many champions have had this title and I have achieved it with just 22 years of age. It is something very important for my career, I know that this fight will not be easy but I have prepared very well. Go Mexico,” said Figueroa, born in the United States but of Mexican descent.

For his part, Ceja talked about his motivation and the desire to get into the ring at once for the important fight that lies ahead as a challenger this Saturday night.

“It is a great satisfaction because it is a world title. I have already been world champion in the past and now I am looking to be the WBA champion. We are in optimal conditions to achieve that dream again,” said “Pollito”.

Once the press conference is completed they only have to climb to the scales this Friday afternoon to mark the 122 regulatory pounds of the weight class to be ready for the fight Saturday. They will be featured on the card with Leo Santa Cruz and Miguel Flores disputing the vacant Super World Super Featherweight Championship.

WBA belt is only on the line for Figueroa 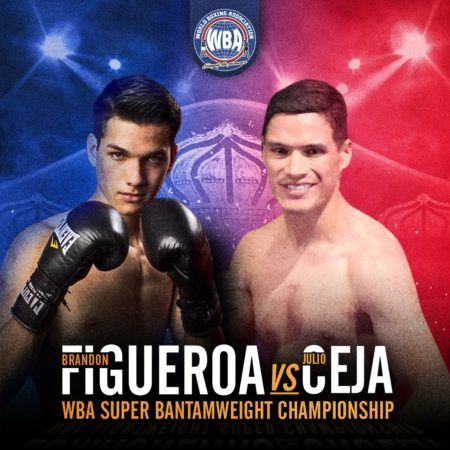