The final press conference for the “Explosive Test” card was held at the facilities of the Hotel Barranquilla Plaza and was attended by the great fighters on the card. Among those present were Jeovanis Barraza and Gabriel Maestre, who will face off in the main event this Saturday night for the WBA Fedebol Super Welterweight Title.

With a high-level production and live and direct transmission through the official channel of the World Boxing Association, the fighters and the authorities gave their views on what will be the great event to be held at the Sugar Baby Rojas Coliseum.

The president of the company Quadrilateral, Sergio Chams, led the press conference together with the Secretary of Sports of the Mayor of Barranquilla, Jose Luis Alvarez, and all the fighters of the evening that will be transmitted through ESPN KnockOut for all of Latin America.

“We have prepared very well for this fight. I thank my coaches Jorge Zerpa and Hector Manzanilla for this camp. Meke, there is no going back, now we must go up to fight and give a great show for the people of Barranquilla,” said the “Captain” Maestre to the media present in the room.

For his part, Barraza, who at all times carried a photograph with his rival, but covered the face of the Venezuelan in a sign of challenge, was a little more direct and assured that he trusts in his power for the fight against the Pan-American champion of Toronto in 2015.

“We are ready and we are well. I tell Maestre that professional boxing is not what he thinks and that here the gloves are smaller. I can assure you that as an amateur has never been hit the way I am going to hit him on Saturday,” the undefeated fighter said defiantly.

In addition to the two stellar fighters, the Olympic runner-up from Rio was present; Venezuelan Yoel Finol, who was grateful for the opportunity to make his debut in Barranquilla against Jeyson Cervantes.

Allso Venezuelan, Angel Rodriguez, and the Argentinian Julian Aristule, will be measured in the featherweight class and stressed being very motivated by the opportunity.

Another interesting fight will be that of the Mexican Erik “Habanerito” Lopez and the Venezuelan Gilbert Gonzalez.

In addition, as classified by the WBA, Rober Barrera and Josber Perez, who will compete for the WBA Fedebol flyweight title, also took the floor.

This Friday will be the weigh in ceremony at the Hotel Barranquilla Plaza at 2:00 pm. 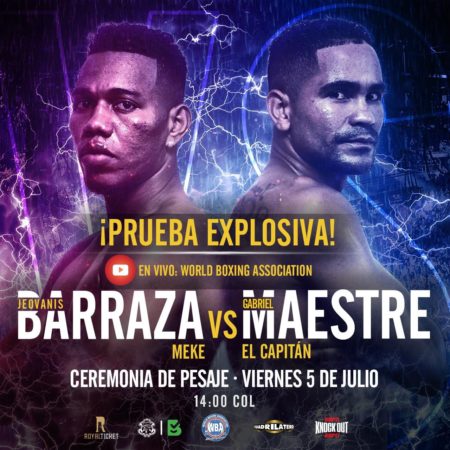