Anthony Crolla will try to recover what once belonged to him. A new opportunity is coming for the native of Manchester this Friday night at the Staples Center in Los Angeles, California, but the challenge he will have in front will be the toughest of his entire career.

He will have to fight a perfect technical fight in order to dethrone Vasyl Lomachenko, one of the best pound for pound and current Super Lightweight Champion of the World Boxing Association (WBA). There have been months of silence and little media attention for the Englishman, who arrives at the fight with few expectations among the journalists but with a lot of motivation.

Crolla has announced that he made this training camp different from all the previous ones, with the intention of shocking the world and grabbing the coveted WBA crown from Lomachenko, which would no doubt give him the upset of the year were he to shock the world with a victory over the Ukrainian.

In November of 2015, Crolla made history in his hometown by knocking out Colombia’s Darleys Perez and conquering the 135-pound belt. Months later he defended against the Venezuelan Ismael Barroso in another great fight, but his streak was cut off in 2016 when he met Venezuelan Jorge Linares, to whom he succumbed and lost the belt. Crolla had a rematch fight against Linares in 2017 but the result was the same and he now has to travel a long way for a new title opportunity.

Three wins, including one at 140 pounds, gave Crolla another chance against Lomachenko, the most fearsome opponent of the division, but against whom he has not much to lose. The Briton has always been characterized by his endurance, his calmness in the ring, and being a persevering rival. In his career he has five title fights, of which he has won two, lost another pair, and tied at one opportunity.

Crolla arrives in the United States with a vision in mind and with a work plan tailored to the intention of upsetting the night of one of the most impressive boxers in the world. The world now waits to see if it is possible.

Vasyl Lomachenko: the man of the moment 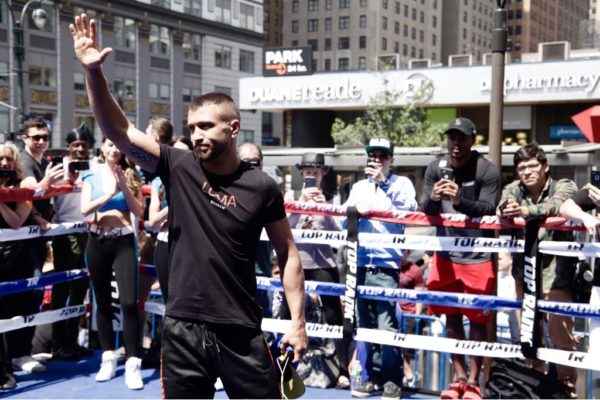