Mexican boxing has achieved countless feats on the best stages of the world. However, something very important was missing for the Aztec warriors: a title in the heavyweight division. Andy Ruiz Jr. arrived at Madison Square Garden without many expectations from the specialized press, but in his environment they knew he could make history against the World Boxing Association (WBA) Super Champion, Anthony Joshua.

In the previous face-offs the Londoner always was the favorite in size and stature. Ruiz appeared at the last minute due to an injury to his original opponent, Jarrell Miller, and was a Mexican heavyweight of whom the casual fan knew little or nothing.

When the Briton knocked him down in the third round with a left hook, everything signaled that it would be another easy fight for the champion. But Ruiz’s heart quickly showed that he was coming to achieve his dreams and when Joshua dropped him, he knocked him down with a combination to drive the people in the room crazy.

In the end, the “Destroyer” displayed his nickname and knocked down Joshua four times to become the first Mexican heavyweight champion.

Although he was born in California, his parents are from Mexicali and he represented Mexico in his teens in international competitions. On Saturday night, the whole country was paralyzed by Ruiz, who with great hand speed showed that effort and perseverance lead to success.

Promotion of Maestre vs Barraza arrives in Bogota 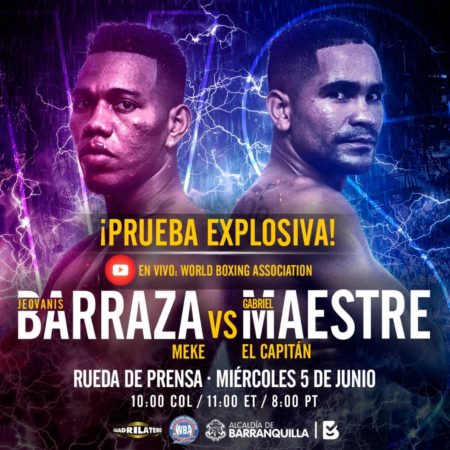