Japanese veteran Kohei Kono (28-7, 11 KOs), 115, stunned the crowd as he impressively captured the WBA super-flyweight belt by dropping defending champ Tepparith Kokietgym (21-3, 13 KOs), 114.25, three times en route to an upset automatic KO victory at 2:08 of the fourth round on Monday in Tokyo, Japan. It was a great surprise even for our aficionados since Tepparith was a prohibitive favorite thanks to his three previous defenses over Daiki Kameda (W12), Tomonobu Shimizu (TKO9) and Nobuo Nashiro (W12)–all out of Japan.

For Kono, it was really third time lucky since he had failed to win the 115-pound belt twice, losing to Nobuo Nashiro in a WBA elimination bout in 2008 and to WBC champ Tomas Rojas in 2010. Kono, eight years his senior at 32, was regarded as an obvious underdog as people here thought he would have little chance to wrest the belt from the formidable Thailander making his fourth defense.

Kono, in the first round, made a good start with solid overhand rights to the cheek of the champ, who looked still too nervous and stiff to smoothly avert the Japanese challenger’s opening attack. Tepparith, however, regained his rhythm with plenty of leading lefts and good rights to the onrushing Japanese to win the second and third by a clear margin.

The fourth witnessed Kono explode a very vicious left hook to the champ, who badly hit the deck with heavy damage. He barely regained his equilibrium, but Kono swarmed over him with a flurry of punches and dropped him again with a wicked triple right to the cheek. Tepparith very barely resumed fighting with a bit rubbery legs. Kono then became furious and ferocious enough to send the groggy champ to the deck for the third time in the same round. The referee Stanley Christodoulou, South Africa, declared a KO victory for the challenger due to the WBA three-knockdown rule.

Before the trick happened, the ex-champ had been leading on points: Carlos Sucre (US) 30-28, Raul Caiz Jr. (US) and Silvestre Abainza (Philippines) both 29-28, all in favor of Tepparith.

Kono jubilantly said, “I’m very happy that I could win the world belt in my third attempt. Many supporters helped me win the title. I wish to thank for their spiritual supports from the bottom of my heart.” 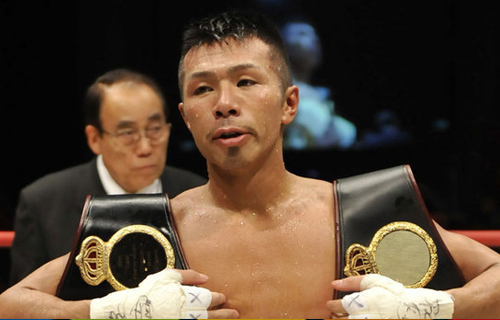