August 17, 2007 – A capacity crowd of 5,000 partisan fans packed the Figali Convention Center in Panama City, Panama to enjoy the WBA K.O. Drugs event. Only a few involved behind the scenes could imagine that the show would indeed be a marathon of 14 bouts, and nine hours! There was something for everyone with slugfests, skilled boxing, not so skilled, and more… The main event of this marathon KO Drugs show had all involved, including this reporter, thanking their lucky stars. In the WBA Bantam eliminator and Fedalatin title match, defending champion Anselmo Moreno of Panama meeting perennial contender Ricardo “Chapo” Vargas. Sporting only a combined 20 knockouts among 76 bouts between them, a stoppage win was that last thing anyone expected.

Somebody forgot to tell Moreno though! Perhaps sensing Vargas had been in more than is share of wars, Moreno went for the kill right away, staggering Vargas with a southpaw right hook. With Vargas backed into the ropes near Moreno’s corner, the champ went for it- unleashing a barrage of unanswered punches that had to number more than twenty. Vargas was frozen until he slumped almost through the ropes, with referee Luis Pabon saving him from further damage. The time was 1:06 of the opening round! So, nearly nine hours after the show started, it suddenly ended…with a bang! Moreno remains champ at 21-1-1, 8 KOs, and Vargas sags to 39-13-3, 13 KOs. In the opening bout of the evening, Nelson Linares, brother of current WBC Featherweight champ Jorge, won by TKO4 over Colombian John Berrio. Linares seemed to be gaining the upper hand when Berrio quit on his stool at the end of the fourth, citing an injured right hand. The referee was Hector Aful. With the win, Linares goes to 14-0-1, 8 KOs and picks up the Fedalatin Super Welter belt in the process. Berrio drops to 11-4, 8 KOs. Next followed a six round female bout in the Super Feather class. Cocky Venezuelan Ambar Fajardo dominated overmatched Colombian Consuelo Patermina, forcing referee to halt maters at 1:47 of the fourth. Southpaw Callist used excellent footwork to take the first two rounds. In the third, Navarro began to successfully cut off the ring and rocked Callist with hard uppercuts and hooks. Callist answered back in the fourth and went toe-to-toe with Navarro. Callist reverted back to the rangey boxer in the fifth, while Navarro chased, finally connecting again throughout the sixth. Sensing the fight was in the balance, Callist visibly looked to his corner man Rigoberto Riasco (the first ever world champion at 122 lbs.) and beyond the corner to current WBA 122 lb. king Celestino Caballero for guidance. Riasco implored “defense” and “one-two” to Callist, who seemed to heed the call. In the eighth and final round, Callist pot-shotted Navarro, did the Ali shuffle, and clowned to the partisan crowd. In the end, the judges saw it for the homeboy by scores of 77-75 twice and 78-74. Callist now goes to 24-6-1, 17 KOs and Navarro tastes defeat for just the second time at 16-2, 12 KOs.

Next followed the semi-final (actually consolation) bout from the “El Primer Guerrero” show, Panama’s version of “The Contender.” The bout paired Super Fly fighters Daniel Deago against Jose Mena. Deago had things his way throughout, knocking Mena down in the second and fifth in a one sided victory. The scores were 58-54 twice and 59-53. The victory catapults Deago into the finals.

Former two-time heavyweight champion Michael Moorer did what he said he would- crushing the suspect Rich Boruff inside of one round via the three knockdown rule. Just before the minute mark, Boruff went down in his own corner, and didn’t look as if he’d continue. Foolishly, he did, going down and through the ropes the second time from a vicious right-left combo to the head. It seemed as if referee Julio Cesar Alvarado was ending the fight as he pulled Boruff back into the ring, only to continue the count and allow the too-brave-for-his-own-good fighter to continue. It was over seconds later as Moorer drubbed Boruff to the canvas face first with Alvarado waving it off. Seeing as Panama doesn’t get to see to many former heavyweight champs live and in person, nobody in the crowd seemed to mind too much.

Moorer goes to 50-4-1, 39 KOs, while Boruff loses his first bout at 17-1, 10 KOs.
In the WBA eliminator for the Super Bantamweight title, #2 rated Panamanian Jose Arboleda faced off against pressure fighting Colombian #9 rated Jose Francisco Mendoza. In a bout that was scored wider than it appeared, Arboleda managed to survive a badly cut right eye, and some powerful blows from Mendoza to box his way to a 97-93, 99-91 x 2 victory. The victory moved Arboleda to 22-2-1, 8 KOs, and into a potential all -Panamanian matchup vs. current champ Celestino Caballero. Mendoza fals to 21-1-1, 17 KOs.

The boxing fans of Panama got their thirst for a glimpse of a former heavyweight champ quenched a second time tonight as Evander Holyfield squared off in a charity event with WBA Executive Vice-President Gilberto Jesus “Gilbertico” Mendoza. The conditions of the match were that $50 would be donated for every punch Mendoza threw against the “Real Deal.” It ended up being s spirited exhibition with Mendoza pressuring Holyfield for all three rounds. In the end, a revved up Mendoza was credited with throwing 300 punches, thus raising $15,000 for the K.O. Drugs effort as well as Evander Holyfield’s foundation.

In the most brutal slugfest of the night, Panama’s Nilson Tapia, put his perfect record on the line against fellow undefeated Juan Ubaldo Cabrera, Dominican Republic in a scheduled six round Super Welter affair. The fact that these two hadn’t a loss between them must have accounted for their effort. Despite a hideously swollen right eye, Tapia never let up, and displayed a granite chin. Cabrera did manage to score a knockdown in the fourth, although Tapia footing was off as the punch connected. In the end, the visiting former Olympian Cabrera came away with a unanimous 59-54, 58-55 x 2 win to move to 11-0, 8 KOs, while Tapia is now 6-1-1, 5 KOs. Tapia has no reason to hang his head after this one.

Just when one thought it couldn’t get any better, it DID! In the live finale to “El Primer Guerrero,” finalists Humberto Obando and Luis Concepcion thrilled the crowd in a 115 lb. version of Hagler – Hearns. The tank-like Concepcion came out like gangbusters and dropped a retreating Obando who quickly sprang up. As Concepcion recklessly went for the kill, he got dropped with a beautiful counter right. The crowd was wild, but it wasn’t over yet. Undeterred, Concepcion kept coming and dropped Obando again. Visibly discouraged, Obando went on his bicycle, but got caught again and went down for the third time in the first round. With no three-knockdown rule in effect, the bell saved Obando. The second round was almost as furious, without the knockdowns. In the fatal third, Obando began to wilt under the pressure, prompting his corner to enter the ring to saved the beaten fighter. Concepcion exulted, climbing to the top strand of his corner and executed a perfect back flip followed by a second one.

The win makes Concepcion the first ever “Primer Guerrero” as well as $8,000 richer! Neither “Contender” finale had a THING on this finale!

In a bout that had little to choose between the two combatants, Brazilian Adailton DeJesus took on Panama’s Roinet Caballero in a WBA Featherweight eliminator and Fedalatin title bout over ten rounds.

Oddly enough, “Moose” Caballero didn’t fight like one — swiftly backpedaling and counterpunching with power, while the sleekly built DeJesus kept the pressure on a stalking, yet quick style. In a fast paced fight with little differing between the rounds, Caballero came away with an exciting 97-93, 96-94 x 2 win. He now moves to 21-7-1, 16 via KO, and DeJesus drops to 19-2, 17 KOs.

It had to happen. With al the great bouts on this marathon card, there had to be one stinker. Who would’ve thought it would be the semi-main event featuring a former two-time world champion? Panama’ Tito “El Misil” Mendoza and American Keith Holmes (former WBC middleweight champ…twice), posed, feinted, missed and clutched their way to a fight that could’ve had no winners. However, the judges saw Mendoza’s somewhat more definitive effort as enough to award him with a unanimous three-way 77-75 win. He picked the Fedalatin Super Middleweight belt in the process. Holmes seemed far from his preflight goal of becoming a three time champion — at least in boxing. 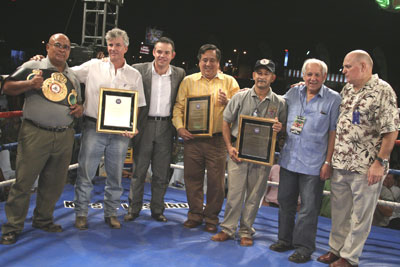 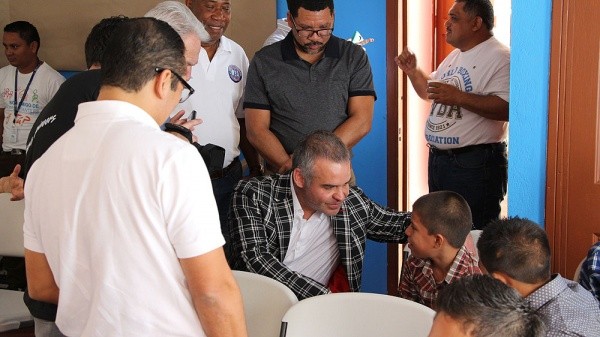 At its inception, the purpose of the WBA KO Drugs... 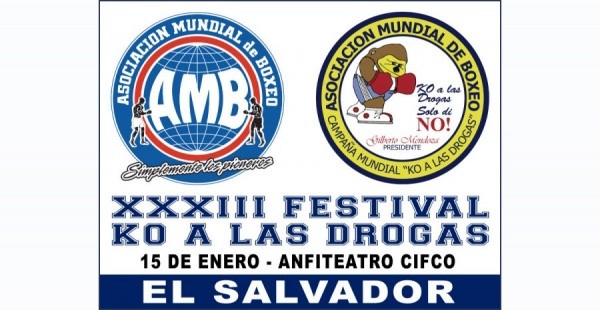