Jack earned the WBA title in emphatic fashion via using his boxing skills to stick and move on Cleverly, saying post fight to Jim Gray “I wanted to box him and feel him out while establishing my jab. Then the plan was to break him down from there. The plan was to finish him.”
Cleverly started to get frustrated and was breathing very heavily early on in the fight.  It was only a matter of time before Jack turned up the pressure and took his man out after opening cuts on his face and wearing him down quickly with accurate combination punching.
“Jack was very strong,” said Cleverly.  “He caught me and broke my nose in the third round. It was a downward spiral from there. I was wounded and protecting myself. It’s horrible but part of the sport.”
Cleverly did not agree with the stoppage, mentioning that he thought it was premature but ultimately up to the referee to make the decision and that he would respect the decision of Tony Weeks.
Most would likely agree with the stoppage considering that Jack had barely broken a sweat while Cleverly was bleeding, breathing heavily, and on the downslide.  Jack said that his nerves got the best of him at times but that his “boxing IQ” was the difference in the fight.
“Everybody doubting me motivated me,” said Jack. “My trainer and my team did a great job getting me to this point. It’s a dream come true. My trainer here had the WBA and now I got it.”
Jack was referring to his trainer Lou Del Valle, who held the WBA world light heavyweight title in 1997.  Jack also used to train with another WBA world light heavyweight champion in Eddie Mustafa Muhammad, who held the title from 1980-1981.
Perhaps Jack is showing us a newer, more aggressive style in the weight class, asserting to Jim Gray “You can’t leave it in the hands of the judges. You’ve got to go for the kill.”
Jack would now like to fight Adonis Stevenson, adding in the verbal jab, “Unless you want a trilogy with Andrzej Fonfara, let’s get it on. Let’s fight somebody real. I’d go anywhere.”
As for where Nathan Cleverly goes now, he said “I have a lot of miles left in me. I’m a two-time world champion.”  Cleverly also added that he was happy to be a part of history despite the outcome, commentating that “The result was poor for me but it’s a fight and anything can happen.”
READ NEXT 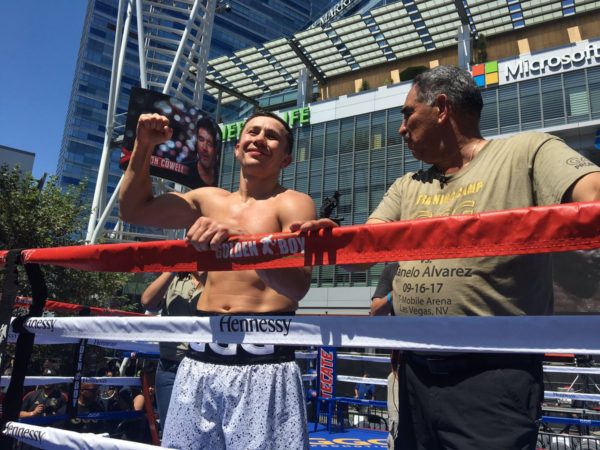